40 years ago today, the United States accomplished one of the greatest historical events in the previous 2,000 years! 40 years before that in 1929 there was more history being created.

There was a community activist rising in the ranks in the country in Europe. He was able to continue to gain status within his party and then get elected as the leader of Germany in 1933. In the middle of the great depression, Adolph Hitler took the reigns of the most advanced country at the time in technology, museums, art, laboratories, universities, etc. Actually the US got a few of the Germans to help lead us to the moon!

The saviour of the 1930's was a smooth talking community based activist. Most Germans knew virtually nothing about him, however, there were many who brought to light of his involvement with groups that shouted, shoved and pushed people around that they disagreed with.

He got his political position by being a great speaker, smiling a lot and by making many, many promises to the German people and the world, in the depression when unemployment was high and growing. Slowly, and with a plan, he seized control of government power, he got kids to join a youth movement in his "good" name where they were taught what to think and to rebel against their parents. He promised jobs to the jobless, money to the moneyless, he pushed for gun control, health care for all, better wages and better jobs, and he promised over and over to bring the pride back to Germans and Germany. He did this with the media basically supporting him without question.

There were many people who let their feelings be heard. They were dismissed and laughed at. Then later killed if they brought these ideas to light.

In less than six (6) years this country's leadership was rounding up their own citizens, killing millions, and turning neighbor against neighbor.

He promised Change. The people wanted Change, The People and the World definitely got Change.

Many have said that the world learned and would never let the history of this era repeat itself.

It scares many to see how close the happenings of the world and the United States today, so closely is following the historical events of Hitler's Germany of the 1930's.

Perhaps enough will be scared enough to stand up to really Change our Country. To bring back the great ideals that our Country was founded, and to make the thousands and thousands of lives that have been sacrificed for those ideals count. To bring families back together, to bring moral law back as the guide to man's law. Citizens of the 1930 Germany did not stand up to save their country, now they are scarred for all of eternity for the atrocities that occured under their very cool, and people oriented leader.

I trust that people will stand up, so the country my child grows up in will be one in which he can freely move around in safety the way his grandparents did!
Posted by Two Cj's at 9:10 PM No comments:

Click on above image to see a few clips from the July 21 St. Louis Globe Democrat that I have kept now for 40 years!
Posted by Two Cj's at 12:00 AM No comments: 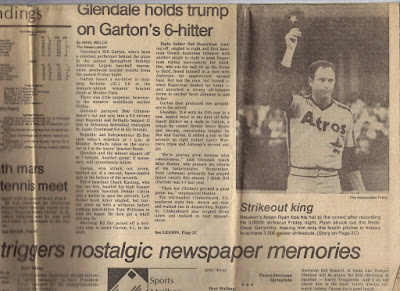 Found this article with a couple notes about ME!! This was the Fourth of July Holiday American Legion Tournament, which we won in 1980! This was my Junior year, and also the year we were district 17 champs with a record of 31-9

You can click on the article to enlarge it for easier reading!
Posted by Two Cj's at 1:37 PM No comments:

The Age Old Question of Suffering

The question of suffering is a question that many people throughout the history of the world have pondered with themselves, their friends and family and with God. I listened to a couple callers this morning on the radio discuss this. I don't suppose that any of us will have an answer to this mystery until, God willing, we are with him in heaven one day.

Suffering usually appears to us as a bad thing in our life. It often is just that. It is always heartbreaking to know some one who is suffering from physical, emotional, or spiritual matters. Although sometimes we bring about suffering in our own lives by the choices we make, we are always moved and affected mostly by the suffering that innocent people, especially children experience.

Why does God permit this suffering to occur? We will one day find out, I'm sure. It has always been comforting to me when I have suffered or know someone who is suffering to keep in mind of the largest suffering that has occurred. A suffering that should not have had to happen. A suffering that puts all other suffering, no matter how big or small, no matter how close or far, in proper perspective. At least as far as my mind can comprehend. The greatest suffering was the suffering of God, himself. The physical suffering that God the Son endured for me and you, and the spiritual suffering that God the Father surely endured by the suffering of his only Son, and the emotional suffering Christ's blessed Mother went through. All to pay the price for our salvation and eternal happiness. When I think of Christ suffering during his passion and crucifixion, when I remember the blood that he shed, and when I realize that he did that for ME....I am truly humbled. I am so grateful that God has invited me, and that by his grace, I am able to take Christ's body, blood, soul and divinity into me at least each Sunday. What a amazing gift that he gave to us through his Church. Many people think that going to church for an hour each week is suffering. When one really realizes that God is waiting and calling for us to visit, how can we resist? I pray that I will never, ever, again feel that going to church is a chore. It is, instead the greatest gift outside of entering heaven.

I have know family and friends who have suffered. I often hear that although God does permit suffering, that always, Good will eventually come from that suffering, although it is almost always difficult to understand that and/or to see the good. One example of a close friend who was suffering from a chronic inflammatory disease, and the good that came from that suffering. Several years ago, this new friend of mine was indeed suffering, and to my knowledge was in a very bad situation. I prayed every day for a miracle, and I knelt before Jesus in the Blessed Sacrament for nearly a month straight, at the little chapel at St. Joseph's, praying for this miracle and healing. After, what I believe was God's answer to my prayers, my faith and return whole heartedly to the Church was in full swing. Not only was my soul brought back to God, I also know of a couple others who have been touched and inspired by this true life changing story. I have never told that friend of my special prayers, however, she may find out some day. And of course the suffering that my son's mother experienced, brought the most wonderful earthly gift to my life.
Posted by Two Cj's at 8:00 PM No comments:

Back at Home in California

Safe and Sound back on the ground in California!

I hope Christopher's trip was AWESOME!!

I can hardly wait to hear and feel his experiences!
Posted by Two Cj's at 8:45 PM No comments:

Check out our posts